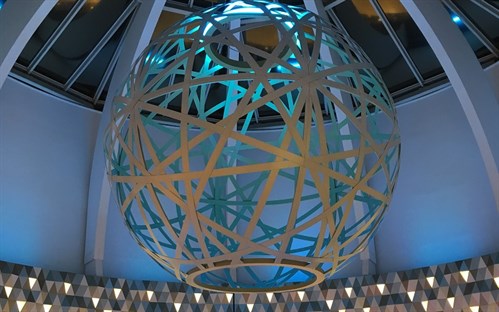 Whereas standard LED’s contain just one chip, colour changing RGB LEDs tri-chips – a red, a green and a blue LED. RGBW LEDs additionally contain a pure White LED which is typically in a Warm White 2700K.

The chips are machine placed onto an Aluminium clad PCB. This has intricate electronic circuit tracks containing IC’s and resistors for total control via a remote dimming software, typically via DMX or Bluetooth apps which are becoming more popular.

This clever little trio of lights is then controlled by the microcontroller, which can also be found within the LED unit. It’s this control unit that’s responsible for turning each of the colours on and off, as well as creating a rainbow of colour.

For instance, turning on the red light on its own; or switching on the blue and red light to create magenta; or the red and green light to produce yellow. And if the levels of red, green and blue are all balanced, then this gives off a pure white light.

So that’s the technical side of LEDs, what are they used for?

Colour changing LEDs can be used pretty much anywhere and everywhere, but they’re most commonly found within commercial environments, such as hospitality venues, used to capture attention and create ambience. Washing certain colours on to ceilings or indirectly lighting certain areas instantly creates more relaxing and welcoming environments.

While in the world of retail, LEDs can help retailers make sure their products stand out and become more visually appealing to the consumers. Colour changing LEDs can be used to make displays look bigger, brighter and better, whether that’s in shop windows, on the shop floor or as part of the signage and overall branding.

Their usage is rapidly evolving too as designers find new uses for colour changing LEDs. From colour-tuneable LEDs being installed on aircraft to help passengers avoid jet lag and using LEDs that can be adjusted during the day to mimic natural light to help patients in maternity units feel more at ease, the scope for this lighting technology is truly ingenious.

But let’s not forget how effective they can be in routine day-to-day life too, whether that’s to create focal points around outdoors, light up pathways, or warm up an interior. And when you pair them with smart technology, which enables you to connect your lights to your smart devices via bluetooth or wifi, colour changing LEDS move into a whole new league of their own.

This kind of technology is increasingly being used in office buildings and commercial spaces as part of lighting systems designed around circadian rhythms. This ‘human-centric’ approach to lighting mimics our natural daily patterns for increased productivity.

We couldn’t possibly focus on colour changing LEDs without giving DMX (Digital Multiplex) a mention too. In a nutshell, DMX is used to set and control patterns of movement within architectural lighting schemes, which includes communicating dimming levels and changing colourways.

DMX connectors can be used to link controllers, such as lighting consoles with everything from intelligent light fittings and dimmer systems, to special effects devices. The combination of colour changing LEDs with the capabilities of DMX is hugely powerful, so much so, it’s capable of single-handedly transforming plain and blank spaces into powerful works of art.

The future’s literally looking bright for colour changing LEDs and for the commercial world, this means even more untapped opportunities to make a difference and stand out.

For more information about colour changing LEDs contact us on info@kempslighting.com or 0113 263 9039.

Next: Beyond aesthetics: Practical insights from a lighting product designer